This may not sound like such a tall order to most, especially because almost everyone owns at least a house.  Except that I made a few financially questionable decisions in my life and while I certainly don’t regret them, they did set me back financially.  A lot.  Up until three years ago, I’ve been of the mind that as soon as a person has enough money to travel, they should.  And as I was collecting a lifetime of amazing stories, photos and souvenirs, money was flying out of my pocket as soon as I could make it.

But then after I finally paid off that ridiculous student loan, I started saving that money with a vague idea of buying something.  But then other financial drains came up.  You know, the typical things life throws at you – new brakes, winter tires, huge vet bills, more travel – and well, the saving didn’t really go all that fast.  But I kept looking around just to see what was out there.  My partner and I liked the idea of a log cabin. But it needed to be close to water.  Prices for waterfront property in the part of Ontario we were looking (not too far from the city or from any of the family) could cost quite a bit.  We had to consider timelines – would this be a cottage?  Or would we retire there?  Did we want a fixer-upper or something already livable?  Did we want to use it year-round or just in the summer?  And the more we talked about it, the more we felt that this dream was beyond our means.  My partner and I started our life together with a lot of debt and while we have worked hard to get rid of the bad debt, we were still a long way away from having a decent down payment on anything sizable.  Much less near water.

Then we learned about the Tiny House Movement.  Minimalist?  Eco-friendly? Self-sustainable?  Off-grid?  And ultra-cheap?  Wait a second….this is what we’d been looking for the whole time except that we didn’t know it!  We are both avid outdoors enthusiasts and neither of us is happier than when we are camping or out doing something active in the great out of doors, whether it’s biking, hiking, snowshoeing or just lying on a beach.  The idea of a tiny house (no more than 400 sq. feet) utilizing the open air surroundings as part of the living space and using only natural resources (wood, water and sun) to live was the perfect plan for us.  What was even better was that these tiny houses cost nothing in comparison to what the average house and some cottages (lake houses, really) cost to build and maintain.  And because the idea is still growing, most tiny homeowners have 100% of the say in the floorplan and construction.

Bring it on.  There’s nothing we love more than a challenge.

For the better part of a year, I had been looking online at what was for sale.  It had to be no more than 2 hours from Ottawa but far enough away that the urban sprawl wouldn’t eventually engulf it.   We wanted something not necessarily on the water, but it had to be close enough to the beach that we could drag a cooler to it.  It had to be swimmable because we LOVE swimming and playing in the water.  And we didn’t want it to have too many amenities, if any.  If we bought land, we would need to have more of a down payment and we’d have to clear it ourselves before building so we started looking at cottages.  But many of the cottages we looked at were either condemned structures or established structures that were already connected to hydro, septic and water.  None of these things were bad things.  But it didn’t make sense to us to buy something that was on-grid just to take it off-grid.  (I’m not sure I’m strong enough to force myself to use an outhouse in the middle of the night, regardless of season if there is a perfectly functioning indoor bathroom.)

In November, my cousins posted a link to some lots that came up for sale on the same lake as their cabin.  An hour away.  North of the urban sprawl.  Completely off-the-grid.  Three-season access road which means snowshoeing in 3 km in winter.  And the price they were asking was peanuts.  Could this get any better??  There were three lots available, all being shown by the same realtor – a cottage (.8 acre), a trailer spot (.2 acre) and a wooded lot (.7 acre).  We had absolutely no intention of buying anything for at least another year so we could save up a bit more but the price and potential of these spots was extremely enticing.  We made an appointment to see them.

And we fell in love with the cottage.  We put in an offer.  I started a Pinterest board (click here to check it out) for all my ideas.   The snow came and, in true country fashion, he had to hike in 2 km through the snow to the cottage to get the keys (because they were left in the shed).  We have a lot of work to do but we know we can make it in to our perfect getaway. 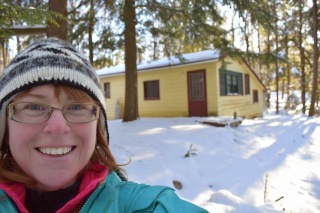 One thought on “How It All Started” 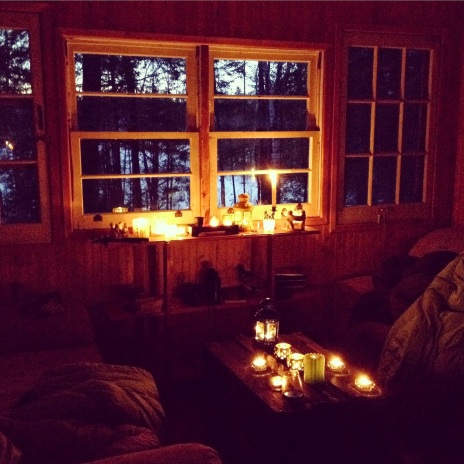 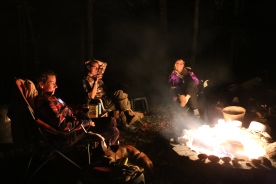 Nothing better than a warm campfire on a cool evening. 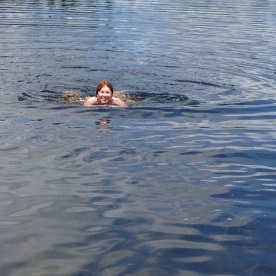 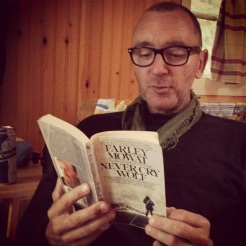 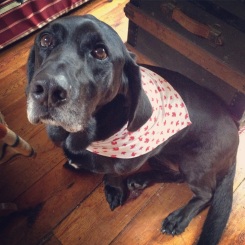 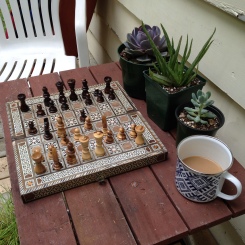 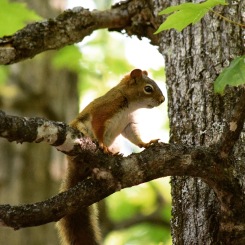 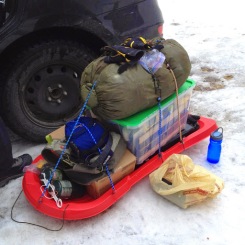 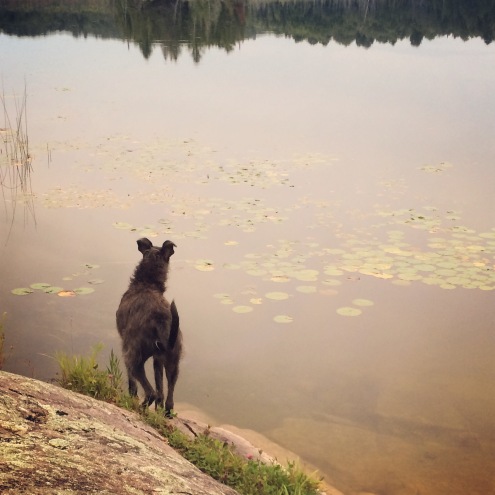 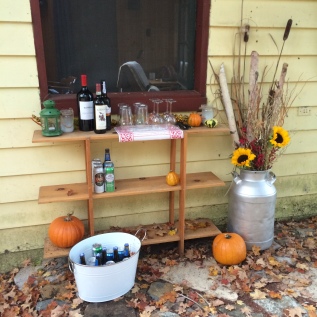 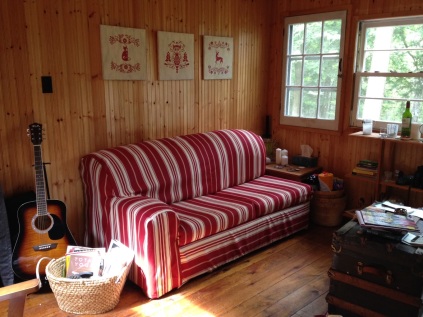 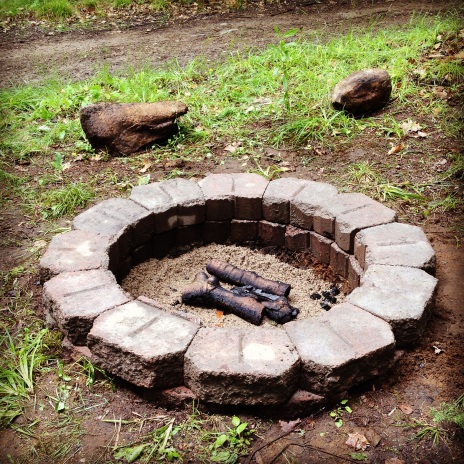 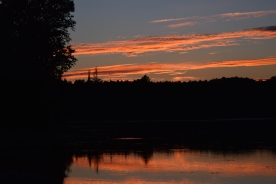 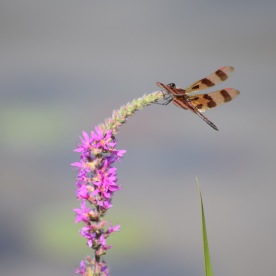 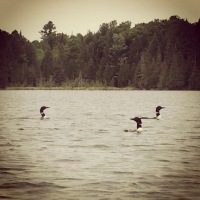 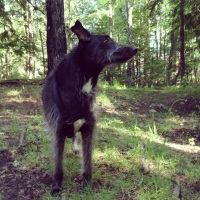 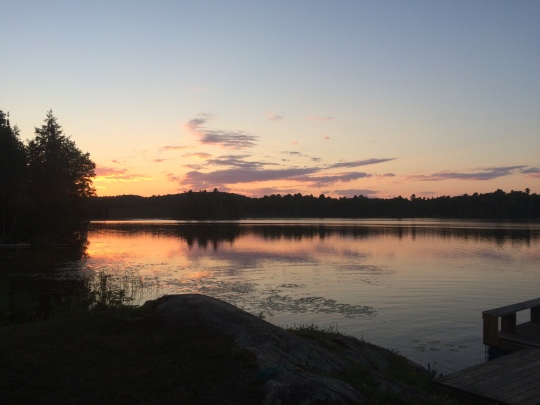 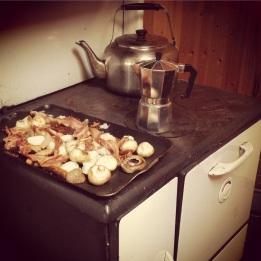 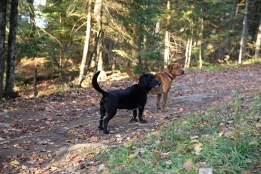 Something interesting is over there. 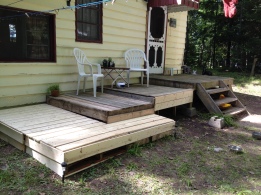 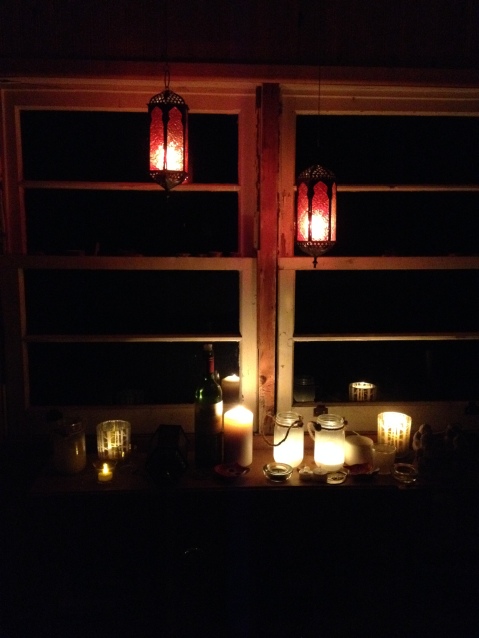 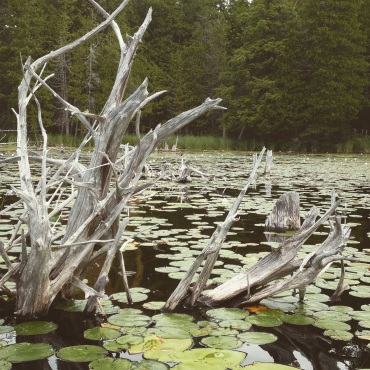 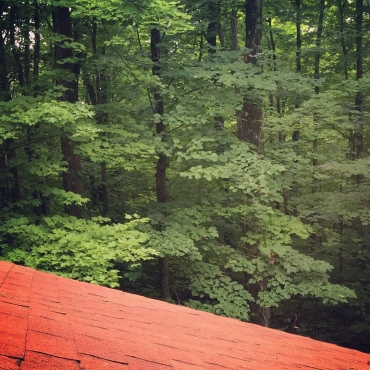 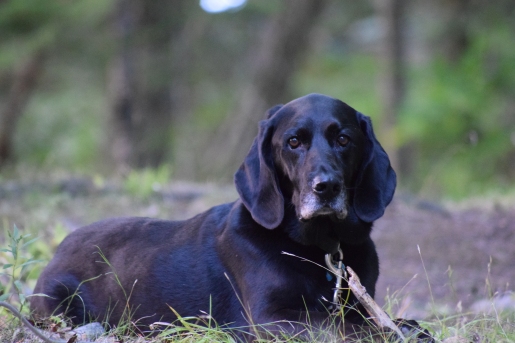 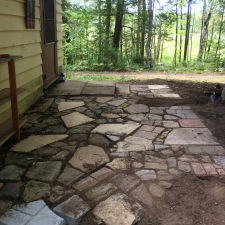 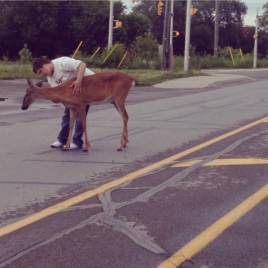 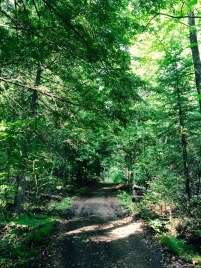 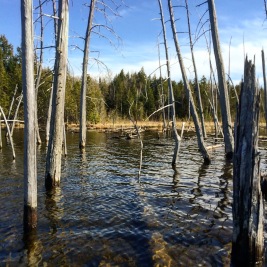